The original Bunco was a dishonest gambling game. It is suggested that it is derived from Spanish Banca, which is a card game similar to Monte.

The game as we know it can claim its origin with a game called 8 – Dice Cloth. This was an 18th century English parlor game.In the mid 19th century, it was introduced to the United States. Here, it merged with the Spanish Banca and then became Bunco or Bunko. This game was definitely a risky gamble. It began to be played in what were called Bunco Parlors. The game continued to grow in popularity, and by the late 19th century, it was a common game typically played by women, school children, and couples. 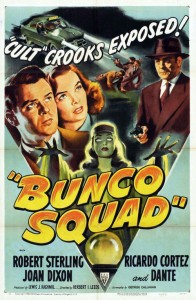 During prohibition, the game experienced resurgence as a risky dice game and started popping up in speakeasies across the country. Eventually the word evolved to mean swindling or fraud. From the 40’s through the 60’s, the term “Bunco squad” referred to policemen who investigate confidence swindles. It was a common idiom used during this time. So much so, that in 1950, filmmaker Herbert I. Leeds created a classic film noir titled “Bunco Squad”.

Eventually, the parlor game aspect of Bunco returned and it became a family game. Modern Bunco groups consist of 12 players (usually groups of women or couples) at Bunco-specific parties.